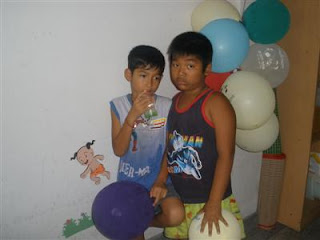 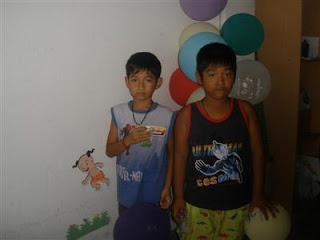 Last month we were able to hold an English Camp in one of the provinces here in South Thailand. We went there as a family and enjoyed the coolness of the place. It’s near the mountains but trains were passing near the place where we stayed.
We had a 5-day camp and the children really enjoyed. After the program on the last day, everybody were taking pictures and the parents really enjoyed the performance of their children. When everybody was preparing to go, a grandma came and talk to us and then my friend told me that grandma’s grandsons were twins who were my students.
I was really shocked knowing about that because for the whole 5-day classes, I could not find any semblance between the two, they really look so different. Then I told them that my father has a twin too but there is something that unites them as twins especially their faces.
I immediately took pictures of these two boys before they left. It’s good that I knew before they went home. Even during classes, I find them fighting, I didn’t even thought that they were brothers.
Now look at them, can you say that they are twins?
http://feeds.feedburner.com/sarahg26/fetz

One thought on “Twins with different features”