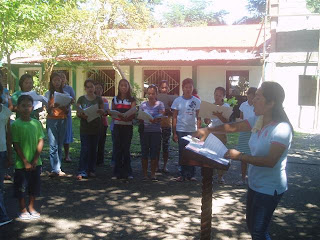 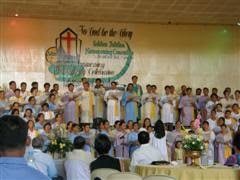 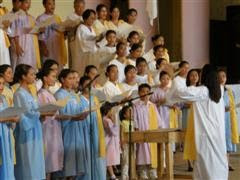 In October last year, I was given the privilege to train 100-voice choir when we were in the Phil. Three months before I went to different churches 4 hours away from our city every weekend to train the church choir in preparation for the coming 50th Anniversary Celebration of a Bible School in the province sometime in October. I traveled a lot during that time because the churches were located either in the mountains or near the seashore. Yet I was so happy to be a blessing to these people. I was full of gladness serving the Lord in that way. There were times that choir members could not join the practice if they are away from the venue due to lack of finances – they have nothing to spend for their fare back and forth. Although they are poor but you could see their excitement and desire to be used for God’s glory.

Most of them were amateur as far as singing in the choir is concerned. So I have to be patient in dealing with them and gave more time for practice. A tiring one but it’s challenging and it’s worth it. We did it for the Lord. They performed well during the performance. And we gave God the glory – He deserves all our praises and thanksgiving. He was the giver of gifts and He gave gifts to each of His children. That was one of my unforgettable experience while serving the Lord.

Alicia with More Than Words has more posts of Friday Photoflashback. Check it out. It’s fun.