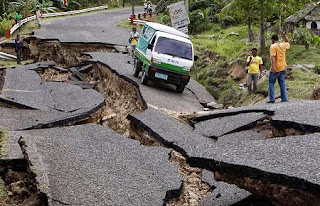 Can you imagine how this happened? After the earthquake last Tuesday this had happened. Earthquake passed by 3 provinces such as Cebu, Bohol and Negros. That would mean roads that are not strong enough especially the foundation will be destroyed just like this. It’s sad that many roads and buildings were attacked by earthquakes and people perish. We need to be protected however, protection came from the most high, the maker of heaven and earth. In the end, we would still be looking up and trust in God’s unfailing love.
http://feeds.feedburner.com/sarahg26/fetz