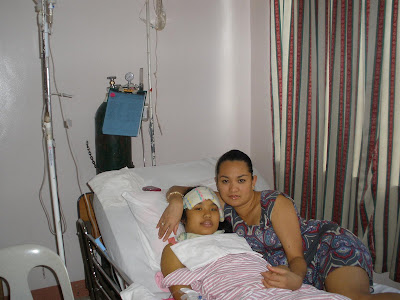 I have a lot of stories to tell about miracles. I, for one had experienced it and with my family too. But there is one that happened recently and I want to share it with you.

It happened when we were in the Phil. with my family early this year. I have a younger sister who’s daughter, Dawna Gaylle, the eldest, was sick of Leukemia. Six years ago, she had already undergone the so- called chemotherapy and she was healed.

Last year when we’re back to the Phil. we had a blessed reunion with my family, we shared our experiences we have had in the field; it seems that everything was full of happiness and with grateful hearts for all the things God has done. But something happened we could never expect.

However, I always believe in this song and I quote:

O rejoice in the Lord, He makes no mistakes
He knoweth the end of each path that I take
For when I am tried and purified
I shall come forth as gold…”

This song really gives me strength to endure trials…

Anyway, that unexpected thing happened was a time for us to reflect on God’s goodness as a family, a hard time for my sister and her family and a crucial time for my niece, Dawna Gaylle.
We discovered it before her 13th birthday last March when her mom saw her paleness and felt something bad about her daughter’s health. She was brought to the hospital for different laboratory tests and her doctor said that they will get the result after her birthday on the 24th of March.

Can you imagine the feelings? A lot of anxieties, tears and fears came…what will happen next? That question came to our mind and a lot of questions that really bother us. But we gave everything to the Lord because we have nothing to do except to TRUST in His mighty power.

That expected day came, and the result was that her sickness recurred and it’s more crucial than she had before (six years ago). All her laboratory tests were down, everything was not normal.
The month of April came and the doctor said, the only medication for that moment was to bring her to the hospital during her monthly period for blood transfusion.

It happens many times because after a week of blood transfusion, she needs to go back for another check up and laboratory tests to make sure that she could survive. And many times she needs to go back and forth to the hospital, it seems that the hospital is her home during those times. I could not imagine the money spent during those times but God was able to provide using different people, friends and loved ones. God has been faithful and will always be faithful.

Then came May, June, and July the same thing happened and Dawna was already bored of going back and forth to the hospital. Her parents, and our family members were already ashamed of asking help from different people especially asking help for the blood donation and other medicines needed but the Lord as what I have said, never lack of provision, He has faithfully provided everything at the right time.

I can attest to this because I was there taking care of her with her mom or dad in the hospital. In August, she started to have allergies of the medicine she’s taking in, and a lot of times she stayed in the hospital for longer days. Every time she went for laboratory tests, I prayed and asked God to show a miracle that many people will be amazed for the life of Dawna. But God has His own purpose and His time is different from ours, so we just waited on His will. And many times she stayed longer hours in the laboratory room, the Med tech could not get her blood because it was too low, it seems that her blood is not enough to get even just for laboratory tests. She experienced a lot of pains and cried a lot. If you could see her, definitely you will cry with her.

August and September came, and she had severe pain because something was coming out from her, a blood clot just as big as a palm of a six year old child, we even take pictures on it. She was crying a lot because every time it comes out of her it was so painful and she was asking Jesus for help. During that time I can’t bear listening to her cries, so I told her just tell Jesus of what you’re experiencing and we prayed together. For me, that was a faith of a child asking God’s help through Jesus. She told every pain she had to Jesus and that her faith grows. I always told her about the girl who had been bleeding for 12 years but when she touched the cloak of Jesus she was healed. If I could not sleep during night time, I prayed for her and ask God’s blessing…

In October, a month of surprises and pains, also a month that she learned to pray for hours, time and time again she prayed, and her faith grows, she cried a lot before Jesus, giving all her pains and struggles, and a time that I led her to Jesus. Again and again, I was reminding her of the love of Jesus and told her that her pains were just a bit of suffering compared to the sufferings of Jesus on the cross!

This was also the month that we were all waiting for God’s mercy, and fears came severely because her tummy was becoming bigger and her toes too. She couldn’t walk anymore, if she wants to go to the toilet, she needs to wait for us to carry her, but the doctor said, if possible she has to stay all the time to her bed so that the blood won’t come out of her. More severe medicines were given to her and more expensive than before. More and more expenses needed for the hospital, for the doctor and for the medicines. We had been asking help from other agencies to make her live. But only few came, God has taught us to trust Him more!

On the 18th of October 2008, she was out of the hospital but very weak. The next day, that was Sunday, we came home late because my sweetie spoke in one of the churches for their Thanksgiving Celebration, it’s about 5 hours travel by bus. So I wasn’t able to see Dawna Gaylle and we slept. By the way, our house was next to my sister’s house. In the middle of our sweet sleeping hours I woke up and couldn’t sleep at all, so while my my eyes were open I say a prayer for Dawna Gaylle. During that time I heard the sound of a car but it’s different. My brother-in-law was using his brother’s car for a moment, usually when other cars were passing nearby, the car would make a sound because it’s brand new. That time I heard only one sound and no cars were passing. I thought to myself, “maybe someone is there outside,” but I didn’t bother to go out and check because I had the peace. Then after praying I slept.

Early morning, I went to my sister’s house and my sister asked Dawna Gaylle to tell me what had happened last night. Then I asked, “Why? What happened?” She said, around 2:00 am, she was saying, “How I wish someone would come and massage my forehead because I can’t sleep!” Then someone came and massage her forehead and she was talking to that person. She thought one of us was doing the massage. When she woke up she told her Mommy Pinky (our youngest sister), whom our children used to call Mommy, who was with her in the room, and my sister said, maybe you are just hallucinating because you just came from the hospital. But my niece, Dawna Gaylle was insisting and told my sister it’s really true, I even talked to the person. You know, that was the same time that I couldn’t sleep and said, maybe someone is there outside. That was the exact time that she was massaged by that someone.

The next day we were busy doing a lot of things so my sister wasn’t able to bring her to the hospital for check up again. On Tuesday, my sister decided to bring her to the hospital for check up, so that we can prepare for another blood transfusion. I ask my sister about the result but she forgot to get the result because the doctor was not there, she was in Thailand. So they took it in the afternoon. When her mom saw the result she was crying and the people were shocked looking at her because the result were all normal. They told me about it, but then I said, maybe they had a mistake: but immediately I told the Lord, “Lord I’m sorry, I don’t want to be like Thomas, I believe in You, Lord!” And many thoughts came to my mind…but I always say, Lord I trust in You, take my unbelief! And we say “THANK YOU LORD” a lot of times for His great love, mercy and goodness to us as a family!

The next day, I went to the 50th Anniversary of the Bible School, and I shared to all the Pastors who were present and everyone was so amazed by the Amazing Love of God and the Miracle that happened!

The next week, the doctor came, and she said, it’s a miracle! But she wanted to make sure that Dawna Gaylle is well. So she decided to wait for another month and another laboratory tests be given. Yesterday, my sister sent a message that Dawna Gaylle had another laboratory tests and all the results were normal even above normal. Then the doctor was convinced that it’s really a miracle! And she asked Dawna Gaylle about the story that happened last October 19 at 2:00am.

What do you think, the one doing the massage? An angel or Jesus Himself?

I always believe, God can still do miracles!!! We only need… to Trust and Obey!

More stories next time! Blessings from the Most High!!!