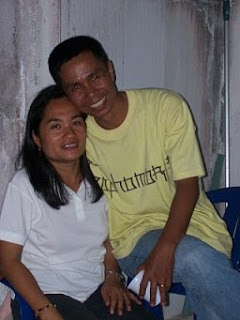 I can’t find any picture of our first sweet/kilig moment. Anyhow, I wanted to join, this photo was taken few years back when were in Thailand.

Our love story was quite long but interesting. Hubby saw me in our concert that was in the month of February. That concert was entitled “Just One Word…Love!” The next day, we met for the first time in the university and he was introduced by a friend. After few minutes I bid goodbye and he was shouting “I like your voice and I like you” waahhhh! I just smiled and giggled but did not mind since I find him so relaxed. Without knowing that we were classmates in one of the subjects.

After a couple of months, nearly the end of the semester, we prepared for our final exam and one of our requirements was to present a demonstration teaching inside the classroom. Hubby was there and after my presentation hubby followed until I reached my dormitory. After that, he did not stop following me until I finished my Bachelor’s degree. We became friends, we wrote letters of encouragement and we enjoyed our friendship. I remember one time, it was my birthday and he visited me and helped me cook the native chicken. Then he gave me a letter with a picture of a little boy with one shoe wearing a navy attire. In a letter he wrote, “This is Matthew, his mom ran away, would you be willing to be his mom then?” Haha! I just laughed. One time while we’re in the beach I even told him that I did not like that my best friend will court me, haha! He was afraid at first yet he decided to go and for the first time, he went to our place which is far from the city and stayed for a couple of days in order to know more about my family. Then, early morning, he would clean the surroundings and talk to my parents and made friends to my younger siblings which at first, was so jealous at him.

After few days, he was able to get the attention of my jealous sisters. They became friends and before he left he asked my father’s approval to court me. That was the kilig time I could never forget. More stories next time…hehe!

8 thoughts on “Our Sweet / Kilig Moments”